It was a while coming, but a few weeks ago I finished my 1/72 Hasegawa F-14A. I bought it from the Hobby Search 1999 store, which, unsurprisingly perhaps, given that it is a Japanese store, has really good prices on Japanese kits. I chose this boxing of the kit because I enjoyed the mixture of low-viz and colour in the various late 80s, end of the Cold War, marking options.

I find modern jets to be pretty challenging to build. I’m always tempted to put etched brass details in the cockpit, which slows things down a bit. Also the two that I’ve made recently have both been swing-wing aircraft, which tend to have complex fuselage construction to allow for the wings to be posed. This model is also the largest one I’ve made since I was a kid. I found that there was not room for me to hold it at certain angles under the magnifying lamp on my desk. This review has everything you need to know about the kit, you don’t have to follow his directions slavishly but he knows a lot about the aircraft and the kit. The problems that he mentions about fitting the forward fuselage and the boat tail to the main body are real, believe me. But after a bit of a wrestle, here she is: 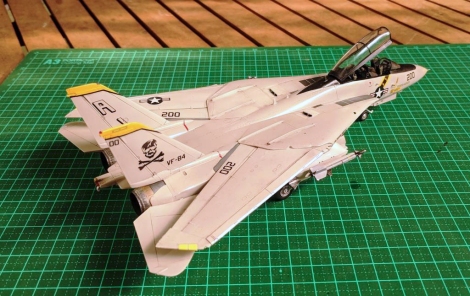 Since I was taking a while to make the Tomcat, I felt like a straightforward build, so I could fee like I was making progress with something. So, from my stash came… the new tool Airfix Beaufighter.

In contrast to the Tomcat, this kit went together like a dream. I had the kit assembled in a couple of weeks. Really it could have been faster, but within that time I also painted the interior and engines. The only extra work I did on the kit was adding etched seatbelts to the observer’s stool, and filling in the wing cartridge ejector chutes. Torpedo armed Beaufighters (‘Torbeaus’) did not have the six wing guns fitted, to save weight. I saw in photos that the gun ports were not there, so I figured that the chutes may also not be present, I’ve seen no photos that prove that though.

The choice of which aircraft to depict was made a little complex by the fact that although I’m a New Zealander, my great uncle commanded 45 Sqn in Malaya, but after they had transitioned to Hornets. In the end I went with the 488 (NZ) Sqn decal option. The paint scheme was deceptively tricky, as it was hard work masking that complex curve around the ‘thimble’ nose.

Up close and personal. I should go back and do something about that air intake, but that’s pretty unlikely, knowing me.

That means I now have two of the NZ squadrons represented in models: I made an Academy Tempest a few years back, in 486 Sqn markings. I see that Airfix’s new Wellington kit has a decal option for the famous 75 Sqn aircraft whose flight engineer won a VC for crawling out on the wing and extinguishing a fire with his greatcoat, so that will be a must-buy too.

What do you think? Cancel reply